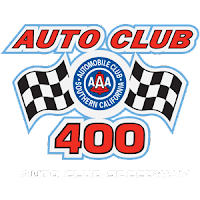 At some point I'll pull back on these freebies, but I'll give this one out because...

Auto Club (I prefer Fontana) is the first low-downforce, high-horsepower intermediate track race with the now standard impound format. This means that teams practice, qualify and race in the same setup. This became the norm in the Cup Series in 2020, but that was a different package.

The impound format significantly influenced race results. Some teams would trim out too much or add too much downforce, but in a high-downforce, low-horsepower package there was not a lot of room for adjustment. In the Next Gen car, the window is much wider. Teams can trim out more or lean more toward downforce. So what?

It's possible that the teams that qualify inside the top 10 will be way too loose in racing conditions, and the best cars during the race will be terrible during qualifying.

TLDR: Stack in the back. Fontana could be a mini-Daytona build, and it used to be (I'll blog about this phenomenon later this week or podcast it).

For access to the Fantasy NASCAR Spreadsheet go to:

...and look for DFS videos at:

...other fun stuff or get weird at:

Posted by Race4thePrize at 6:22 PM