The Tradeoffs of Not Practicing 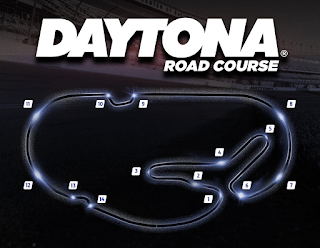 Bob Pockrass posted some interesting Daytona Road course notes in December. Among them is the unsurprising note that there will not be practice for The Clash or the week two race.
First of all, the Xfinity and Trucks Series need practice. There is no way around it. The racing product is embarrassing without practice. Imagine paying full price to watch a dress rehearsal. The actors are holding their scripts and the director is shouting instructions while the stage hands stumble around in the back. An argument can be made that the drivers don’t really need practice; they need to be better on restarts, and that cannot be simulated in practice, but that argument is not being made. Instead we hear something about Covid, and words like adapt and evolve are thrown around to silence critics.
The Cup series has road raced before without practice and it was fine, but we really do not know. There isn’t a baseline. We do not know what stock car racing at the DRC looks like with practice. Besides, the broadcast last season was terrible. Viewers never got to see how the field was handling the course.

Allowing short practice sessions has the fewest injurious trade-offs. Obviously cost is the biggest concern. If teams can’t afford a 30 minute practice, then sit out. Save your money. Better yet, quit and find something else to do.

“But it won’t be fair. The big teams will be able to practice while the small teams sit out.” What is unfair? Small teams have the option to practice, if they can’t afford to compete then they can’t compete. Imagine opening a hamburger stand and complaining that McDonalds has more employees than you. What if college football implemented the ridiculous equity policies of NASCAR? We’re sorry Alabama, you’re not allowed to practice during the week because Eastern Michigan University is poor. No one would watch.

By choosing to not practice, the tradeoffs are much more severe. The unintended consequence of this policy is that by not allowing teams to practice for the week two race at the Daytona Road Course, NASCAR has effectively turned the Clash into a glorified practice session.

If you do not believe that the Clash is a disaster, then why is the Clash sponsorless? This race is always sponsored. Spare me the Covid excuse, the alcohol companies have been doing pretty well for themselves this year and corporate america has never been stronger. The truth is that no one wants any part of this event. In December of 2019, Anheuser-Busch begrudgingly agreed to return as the sponsor of the boring Sunday afternoon 2020 Clash. This year, it’s a hard pass.

This is all very simple, but the galaxy brains in the NASCAR luxury suites are incapable of high level thought. “Fewer practices means saving money. Yay!” -- END OF TRANSMISSION. It’s not 4D chess. An average mind will realize that the tradeoff to not practicing for the week two race is that The Clash will become less than an exhibition. Why can a beer company understand this, but a racing business cannot? When they realized the folly in their way, the answer was to mix up the packages. Here we are weeks before the race, and the teams do not even know what package will be used in each race. Imagine if Duke didn’t know whether the NCAA was going to use an NBA shot clock or college shot clock.

Here’s what NASCAR needs to hear: stop meddling. You’re meddling causes unintended consequences that result in more meddling which results in… you get the picture. The Clash is dead, you’ve killed it. Now leave it alone. Stop trying to save it, and while you’re at it, stop trying to save anything. Just sit down, and let things happen. Stop being a micromanaging Karen.
Posted by Racer X at 2:00 AM

Email ThisBlogThis!Share to TwitterShare to FacebookShare to Pinterest
Labels: blog