The State of Xfinity Plate Racing 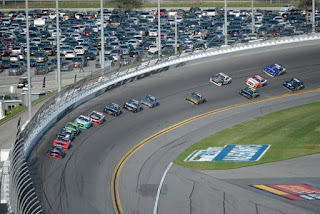 An Xfinity plate racing win means nothing. A win at Daytona does not boost a young driver’s career. It doesn’t open doors or catch the eye of potential suitors. Everyone knows plate races are luck and are not a good measure of talent. Cup teams do not evaluate drivers based on plate wins (just ask Ryan Reed), so why try?


Wins are great, but plate wins do not correlate with championships and the purses are small. A simple risk versus reward analysis will lead to the obvious conclusion that these races are just a step above exhibition. Very little can be gained, but so much can be lost.

Nearly every team is poor. A wrecked race car significantly impacts the relatively well off teams. The time and money spent fixing cars pulls resources from other activities. For the dirt poor teams, it can be fatal.
It should surprise no one that the earl season plate races are single file parades. This is a new phenomenon. Just a couple of years ago, the entire field was wrecking out at Daytona, but times have changed. The Xfinity series got poor fast. Ganassi is gone. Roush is gone. RCR has one part time car. The biggest names in series have graduated. SHR’s cars were mainly sponsored by SHR last year. Given the financial state of the series, NASCAR should strongly consider reducing the number of plate races.
It only takes a couple of minutes foot moves to prove me wrong, but once the cautious plate racing snake forms, it’s head cannot be cut off.
Posted by Racer X at 5:08 PM