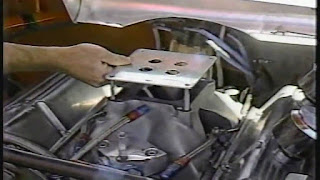 We do not know how this will work. It’s theoretical...in the past, NASCAR theoretically fixed the sport with annual down force reductions, but nothing changed.
In defense of the latest theoretical fix, the previous package changes were widely criticized from the get go....

NASCAR took away down force, but that coincided with lowering of horsepower...Tony Stewart was outspoken in his displeasure...true drivers need the ability to go over the edge....but the current car is maxed out....it’s not a test of driver skill...an averages drive with the best aero engineer is the champ...this expedited Tony Stewart's retirement....I would also argue the CoT greatly hurt Jr’s career
Gordon always argued for soft tires ...not aero changes


So here we are again,,,, but the drivers are not saying it won’t work..they believe that it will work... but it will create iRoc


There’s no point in deciding whether we like this now ...let’s wait till their are actual
Races
What we can ponder is how will restrictor plate light racing affect DFS. We likely won’t get freight train packs like Dega and Daytona, and we might not get Indy car 2016 pack racing, but we could get iRoc.
There’s drafting, slight slingshots, but the big deal appears that the leader won’t pull away. The leader should still lead, passing will probably difficult. If you’re able to clear a car...how do you separate? Who’s to say that car doesn’t pass you right back. Hogs will still lead laps - again this is all preseason theory - the question is fast laps.
We know that they are meaningless at Daytona and Dega, but those plates are bigger and we get the long drafting lines That was the case at the all star race and the Michigan Xfinity test, so that doesn’t help either


All we have are cellphone videos from a Fontana test. It looks like iRoc. It looks like any top car could be the fastest on a given lap based on draft
Big if true...
The initial thought is that screws Everything up...it certainly changes slot, but it might be a net positive
As long as the fast laps go to top cars and are not totally random... it could open up the player pool
You may not need to roster 2-3 hogs...it may be possible to focus on drivers that earn top 10s and earn some fast points on the side ....those 8 to 10k drivers staring to close to the front that would finish well but weren’t going to be hogs that you could safely ignore ...they might be the keys to winning in 2019


A lot of questions will be answered at the end if the month.
Las Vegas Motor Speedway. The first organizational test of the year will find 14 drivers at the 1.5-mile track on January 31-February 1.
14 cars is a good number
Thursday 11 am to 9 pm ET on Jan. 31 and Friday 11 a.m. to 4 p.m. ET on Feb. 1.
Would be cool to get a web stream at least
This reminds me of the first big attention I got in DFS NASCAR...I stumbled across 70 DFS podcasts that I did for Daily Fantasy Radio and the Fantasy Sports Dojo in 2013.,..but that stats are week
The first real attention was an article I wrote on rotogrinders...and it’s still their most viewed fantasy nascar article ...to their credit they left it up...
It’s also the origins of soup mafia
This is where soup first called me out and subsequently T...from there the rest if history
This article may only apply to short tracks
If you asked me right now... I do not believe that the lap leader will earn demonstrable fast lap total ...there will be a #1 an #2 driver but their score will be heavily influenced by laps led
That brings 1 and 2 closer to the field, and this boosts the weight of place differential
Point per dollar returns will be a large factor as it always is, but it will be hard to roster +11k drivers
As I close ...let’s look at the upcoming racing calendar
Jan 18-19 chill bowl on Mav TV
19-20 race of champions in Mexico - not sure if there is TV coverage
26-27 - 24 hours of Daytona - love this event
31-1 - LV test
Feb 9 - clash practice 10 qualifying and clash
Next week 500