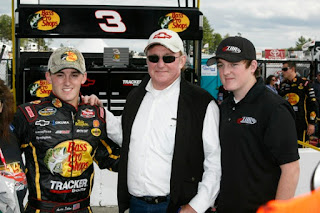 There isn’t a scenario where these kids weren’t going to end up race car drivers. Robert Plomin’s research reveals that genes play a bigger role in our lives than previous thought. This does not mean that environment does not play a role. Genes are number 1, nurture number 2; together they’re a hell of cocktail. Basically, the son of a driver is genetically predisposed to be a racer. Then factor in that the child grows up in a racing environment. It’s impossible for some of these silver spoons to not go into racing. If you still want to be mad, then you better start celebrating the children that do not go into racing. These children are brave adventurers throwing privilege to build their own lives, but you don’t care about them do you? Partly because they don’t exist. All of these boys go into racing. If you hate it now, then be prepared to hate the next generation.
For good measure, you should purchase CashBowyerSucks.com and OwenLarsonIsABitch.com.
Silver spoons are not going away and they are not new. There is a proliferation of undeserving drivers, but there is nothing you can do about it. Basically, you are arguing for rides to be earn in a fair manner through hard work. That doesn’t work in any private avenue of life. How many people have you worked with that are fair, decent, and hard working, but there stuck in the same position? Government protected rights and equality, yes that should be fair for everyone. Private business, no. Discrimination is legal as long as it is not based on race religion or sex. Richard Childress can discriminate on the basis of whether you are his grandkid or not. He could also discriminate based on competence, but that clearly hasn’t happened has it Paul Menard.
Let this one go. Leave Austin Dillon alone. To those who have everything, more will be given; from those who have nothing, everything will be taken.