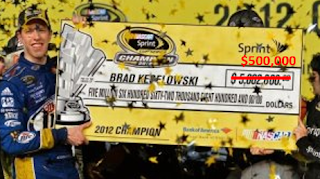 Ryan Newman - hit the bricks
Avg finish 17th last year
I don’t think Hemric will match that in an RCR car
Newman gets more out of the cars than anyone
...but….is that a reason to overpay…..no probably not

It’s hard to really analyze the drivers…..because we do not know the contract specifics

Why don’t we know the salaries???!.
.,...it’s rude to ask....it’s none of our business
The NASCAR media is always trying to be to friendly

contract secrecy benefits the bosses…. and the owners of the means of production
They play workers off each other....
if everyone knows that they are getting screwed then they can demand changes
Thats how Kurt Flood and the MLB players changed sports
Maybe that doesn’t apply here.... NASCAR drivers comparing salaries and demanding fair contracts is comparable to
asking Kmart for a raise... good luck with that

Either way Every pro sport release salaries ....
the nascar media needs to stop being friends and ask the tough questions…
But they might pull my media credentials

it always comes back to that....
nascar hangs this over the media’s head ...and controls them....
fans are forever stuck with vanilla content and
human interest pieces by Jeff Gluck (which are good, if you like that sort of thing).
....NASCAR has done this for years....
now fans don’t even bother reading the garbage
Fans would rather read what other fans write on reddit or social media….it might be crazy with a dash of conspiracy….but it’s honest
The traditional nascar media is closing down

Nascar magazines - have been dead for years

Newspaper coverage is gone ...what is a newspaper?

Fox sports....the owner of half of the race broadcasts -
fired their NASCAR writers,
the internal organization whose sole purpose was to drive traffic to the broadcasts ...they got fired
Did you ever read the post practice articles on Fox Sports?
Tom Jensen…. A beloved NASCAR writer…. Took the practice speed pdf distributed by nascar…..and turned it into an article.
Google “Monster Energy Practice 1 results from Sonoma Raceway”
Let’s read together:
Truex drove the No. 78 Furniture Row Racing Toyota to P1 on the board by posting a fast lap  of 94.587 miles per hour late in the session.
That knocked off Denny Hamlin, who wound up second at the 1.99-mile road course with a lap of 94.068 mph in the No. 11 Joe Gibbs Racing Toyota.
Third on the speed charts Friday was the No. 17 Roush Fenway Racing Ford of Ricky Stenhouse Jr., who had a best lap of 93.684 mph. Clint Bowyer, the 2012 Sonoma winner, was fourth in the No. 14 Stewart-Haas Racing Ford, followed by Dale Earnhardt Jr. and the No. 88 Hendrick Motorsports Chevrolet.
You know they didn’t pay to sen that guy to california… he wrote that at home by looking a speed chart
I know that people were sad that Tom Jensen got fired, and I hate that for anyone, but what do you expect - if that’s what you are turning in for work?
Imagine you write a recap for a baseball game by only looking at the box score.
Bryce Harper hit hits 20th home run in the fourth inning.
The braves took the lead back when Freddie Freeman knocked in his 75th RBI.
Is Tom Jensen an algorithm?
I will be the first to admit that I have turned in some bad work
I had a fulltime job, and what felt like 300 freelance writing jobs each week
I knew when I did lazy work….and I knew that if I kept doing that….then I would not be around for long
But I did not grow up in the NASCAR bubble
I’ve only been a fan in the dark days
I’ve never taken my opportunities for granted….I’ve never assumed that people would always come back
I’m not old guard nascar dinosaur media
I’m always trying to figure out what people want ….and trying my best to bring it to them
This is an example….do you want this? I don’t know
But i know that NO ONE is asking important questions ...someone has got to be thinking this….someone has got to want change

These are self inflicted wounds....no one stood up ... and one by one….. they fell

If only one ”journalist” put journalism before their paychecks and asked about Paychecks!


Fear and anxiety surround every aspect of NASCAR
It’s not just the media
It’s the guy selling diecasts
It’s the guy in the canopy tent set up in the Hardees parking...selling die casts and imitation Kenny Wallace shirts
The hotels with vacancies on race weekends
The waitress that pays for christmas each year with race weekend tips
Transparency is a major issue ...and that’s expected when one family owns a sport
It’s like an alcoholic ….they try to hide their problems….and believe that the problems are hidden
But everyone sees it...they’re just afraid to say something…
This will ruin our relationship
This will change everything
Maybe it’s not so bad
The alcoholic could recover...if they’re honest and let others in
They need to let their friend and family help….
But the friends and family can't wait ...sometimes...if you wait on a weak person to change….they just die
This is a tough job for the media...they did not know that they were going to lead an intervention
The media thought it was champaign baths, confetti, and mustaches
It’s a hell of a burden
But it’s a once in a lifetime opportunity
It’s an honorable responsibility
Risk your journalistic livelihood to save NASCAR
...and if you don’t….don’t worry...your livelihood will disappear - just like the others
I didn’t mean for this podcast to be media focused
The goal ….eventually….in part 2…..is to discuss why knowing salaries and team dynamics matters
Before we can have a conversation on the changing NASCAR driver model
And it has changed ….and it is a big deal….a 180 degree change in direction
The pendulum has swung to the other extreme
Nascar has gone from superstars to scabs
That’s a big conversation ...and an inflammatory one…
It’s paramount that it be supported by facts.
...now….I’m not going to let that get in my way…
I don’t care… and I’ll make assumptions and not worry about the facts
Because No facts have been revealed
NASCAR reporters are afraid to ask about contract specifics….and I’m not going to wait for them to watch Jordan Peterson podcasts and develop a backbone
By the time that happens, they’ll all be fired
In part 2 ….we will talk scabs vs superstars